Road tripping with kids, a lot of luggage and a Tesla Model S

Last year, when we would go on vacation to Sweden with the Model S, it was our first really long journey with an electric car. I had to convince my wife that it would all work out. It was certainly the case, since in Scandinavia electric cars are a lot longer a common sight in traffic than they are in Belgium. A lot more charging stations, so charging options were abundant.

This year we decided to go on another road trip, but this time we would visit Croatia and Slovenia. Places where superchargers are not as common as in most West-European countries and the electrical grid is notorious for its unreliability in some areas. But to my surprise we didn’t discuss the question whether or not we would take the Tesla on this trip. That is how natural is has become for to just take the Model S and go wherever we want. 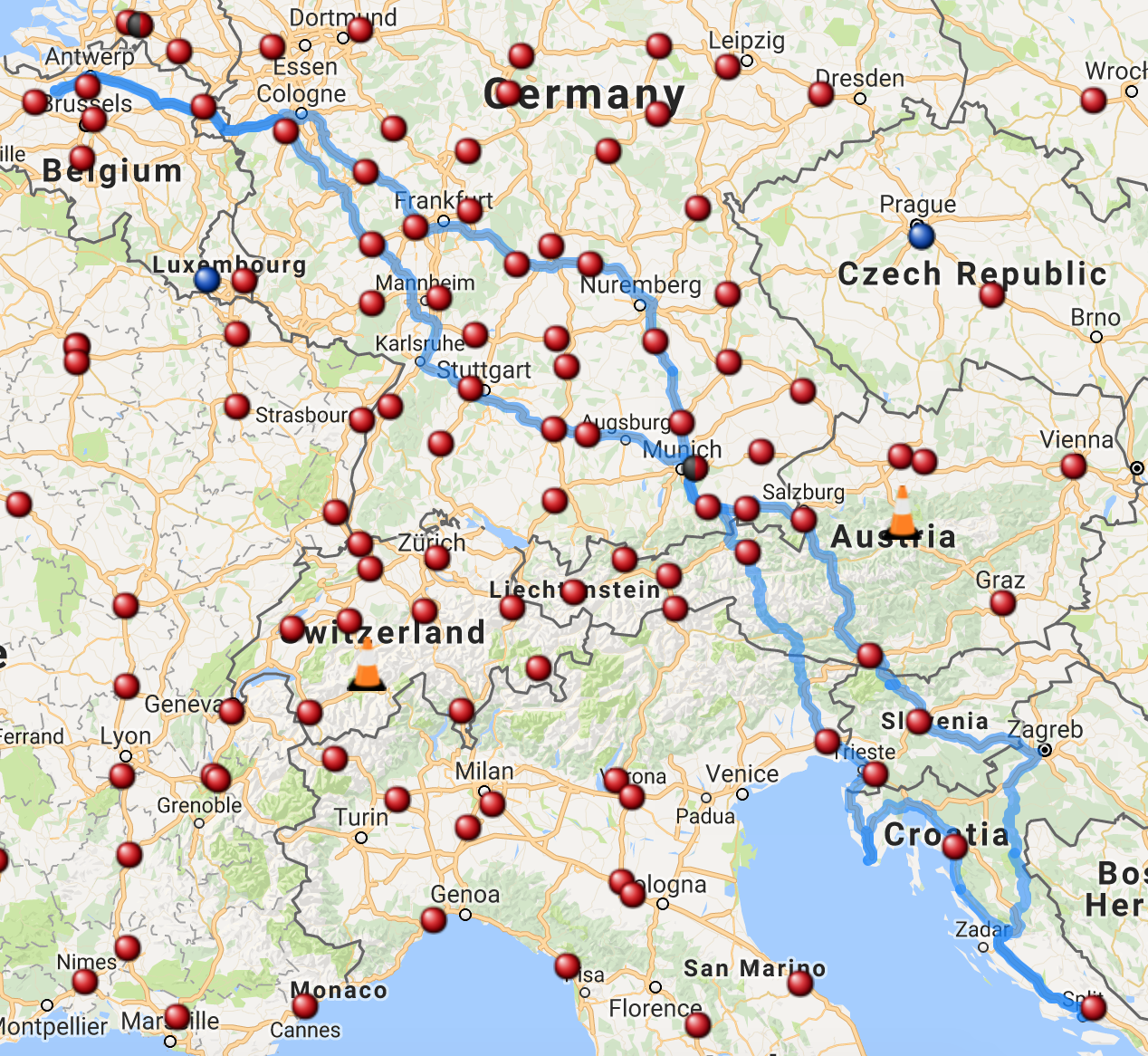 In the statistics I mentioned an average travel speed of 85 km/h for our longer distances. This is consistent with the number I got last year on our road trip to Sweden. At first sight this may seem kind of slow, but if you factor in the fact that this number includes all stops for charging, lunch etc. then it makes a lot more sense. The advantage of driving a Model S is the fact that because you have to supercharge every 2 hours on average, you also have to take a rest for at least 15 minutes before continuing on your journey. Even though this year I once did a 4-hour trip between superchargers, but then we stopped at the “rodelbahn” in Lienz, Austria to take a welcome break from driving.

These times are not only the recommended driving times before needing to rest, but it also makes sure that you enjoy the trip itself more, that you take a walk in places you would never stop otherwise (and maybe you discover some hidden treasures). The consequence is that you are better concentrated on the road during the trip and at the same time more relaxed at the end of it. In that perspective I see supercharging as an advantage instead of a drawback.

Do I need to plan to get somewhere?

I’ve lost count how many times I’ve been asked the question how far you can drive a Tesla. This year I always answered “At least as far as Croatia and a lot further as well”. Of course they don’t mean it in that way, but it remains a questions that hovers around all electric vehicles.

It is of course still a fact that electric vehicles are not yet a 100% equivalent of a regular gasoline or diesel car in the sense that you don’t “fill up and drive off”. You still have to adapt and superchargers are not yet everywhere (although Tesla is changing that very rapidly nowadays). But there are enough of them to allow you to travel without thinking about that. The built-in navigation makes sure of that, because it neatly routes you via all the necessary charging stops. And once you realise you shouldn’t fall into the habbit of “filling up”, the adjustment is not too bad. 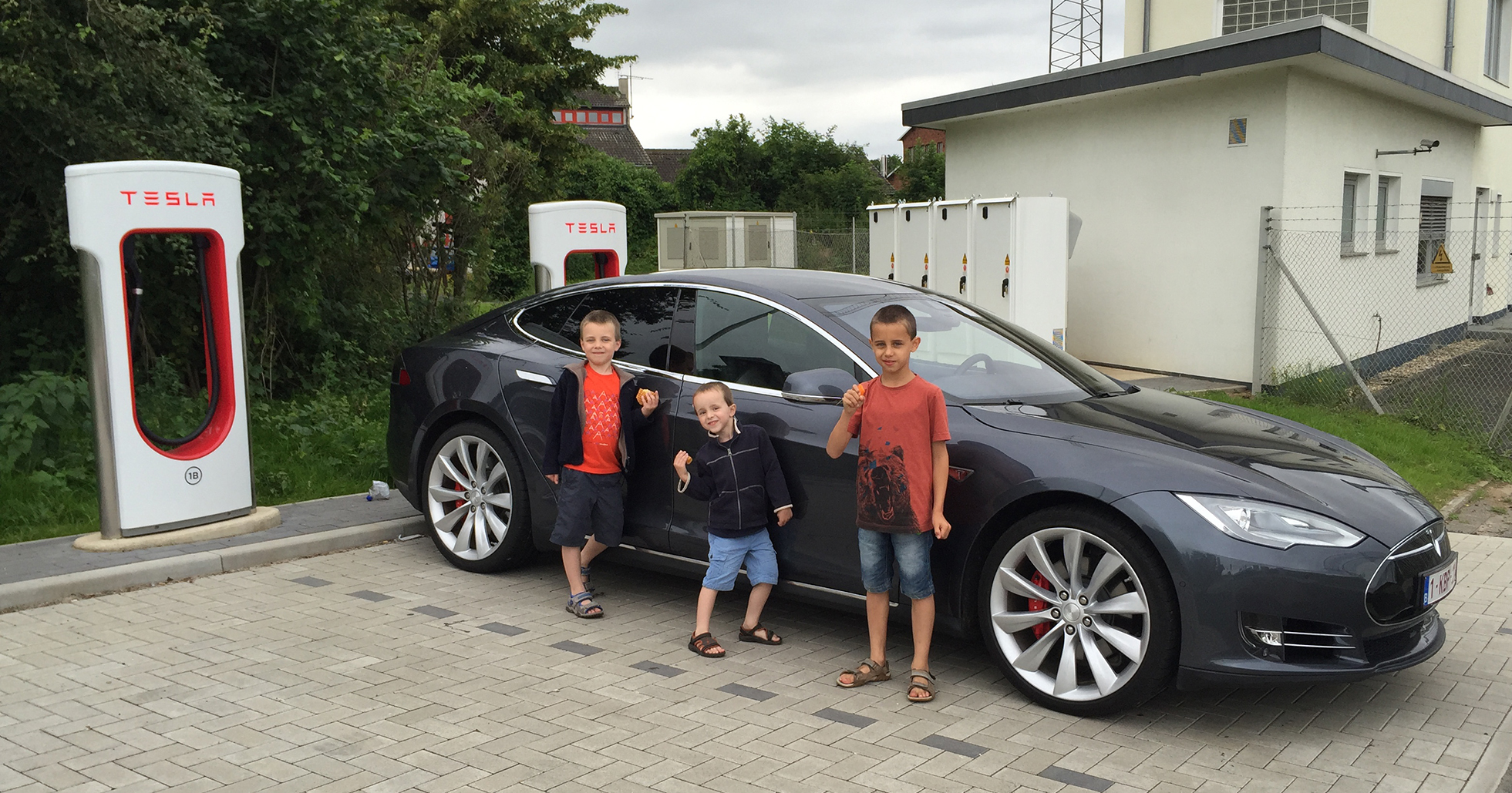 In that respect I try to combine the charging stops with either a lunch break or a nice activity for the kids. This year we only had to wait for the car to be ready 1 or 2 times. All the other times, the car was actually waiting for us to come back and continue the trip. In essence you just have to charge to get to your next charging stop (including some margin of course) and don’t have to charge to 100%, because then you lose a lot of time since charging at higher percentages becomes really slow. So, the lower your charge when you arrive, the faster you can get going again. As soon as you figure out that system and you know the car’s consumption with your driving style, it’s not a big adjustment to go on an all-electric road trip.

It is only when you go outside the range of the supercharger network that it takes a bit more planning. In Europe there are quite some public charging stations available, but often you need special RFID cards to be able to use them. It would be nice to have 1 card that can use them all and some companies try to reach this goal. But there is still a long way to go before we get to that point. Often public chargers are free too. Or you can charge in the harbor using the 3-phase red plug, of course only after consent of the owner or harbor master. 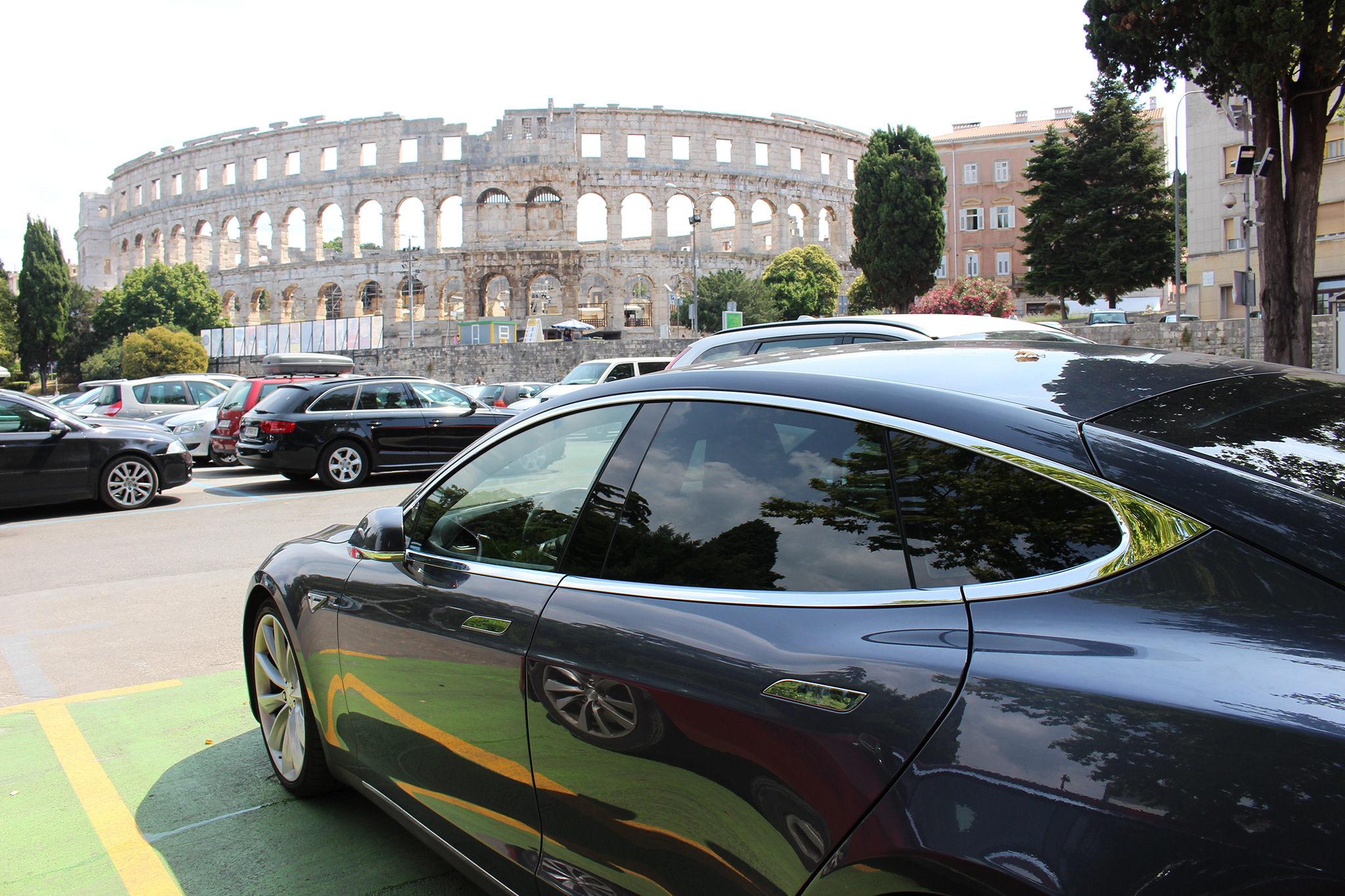 Besides that, our strategy was to just plug in at the apartments and houses we rented using the standard Schuko household plugs. Those are really slow, but if you can let the car charge for the whole night, you find yourself having gained another 150km of range in the morning.

So yes, you need to plan ahead some to charge in the proper locations, but often it depends on your mindset and how much you really want to plan or calculate. Some say “just drive and we’ll see”. However, I’m the kind of guy that wants to have a plan B for everything (yes, you can call me a control freak ;-)). That way I have peace of mind when I test the car’s limits, without ever having the so-called “range anxiety”, which is basically the fear of running out of energy before you reach you destination or charging stop.

This year I told myself to get through Germany as quickly as possible (hitting 200km/h on a regular basis), but from that point on to take a little highways as possible. While an added bonus is that you don’t have to pay the vignette in Austria and you can skip some road tolls in Slovenia and Croatia, that was not the main driver of this decision. The real reason is simply because highways are boring. Driving on mountain roads is more challenging, but also more fun. And at the same time you get a lot of amazing landscapes and beautiful views in return. You discover a country in a different, more intimate way than by just getting from point A to point B as quickly as possible.

With my P85D in Insane mode, I had all the torque I needed to drive up the mountains with ease. The aspect of the car that I appreciated the most at that point was the fact that you never have to change gears, since there is only one gear. While driving up a mountain road I remembered having to downshift and upshift constantly with our other car that we used to take on these kinds of trips. Every time the fuzz of choosing the right gear (sometimes picking the wrong one) in every sharp corner or steep section. With a Model S there’s no need for that. You just shoot out of each corner without the feel of the car having to work its way up the mountain. Add the factor that it is a 4-wheel drive car and driving on mountain roads is both incredibly safe and a pure joy. 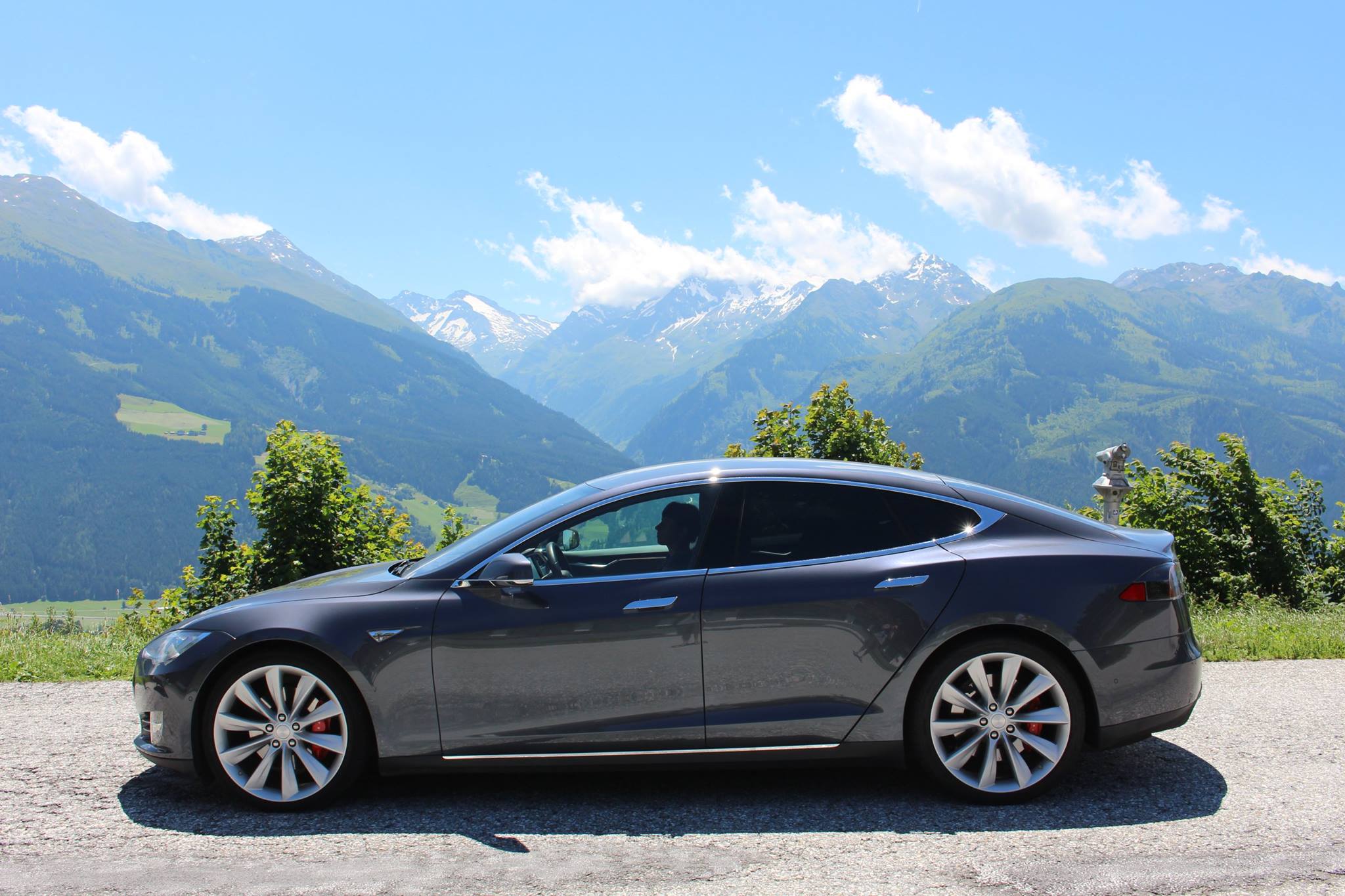 One of the cool aspects when you drive around in a Tesla is that despite the fact that they become more prominent in the streets, everywhere you go, people are coming over, asking questions and taking pictures. Some may find that a bit annoying, but I love the fact that I can show of this beautiful machine and I can inform people about living with an electric car. Often they are amazed that we travel that far with a pure electric car and they admire my bravery. But once I explain how it all fits together, they usually say something like “I had no idea this is so easy”.

So, any location we parked people were bound to show up, look at the car and ask questions. At every house or apartment we rented, the landlord or landlady usually started the conversation with “Nice car! want to trade with mine?” After that it mostly turned into a conversation of at least 15 minutes about the car: the performance, the ease of use, the range etc. In fact, by now it happens so frequently that my wife has already gotten used to it and she just know I won’t be available for the next 15 minutes or so :-).

This year was another successful road trip: stunning nature scenes (and about a gazillion pictures to prove that), beautiful roads, lots of sun and not a single problem with the tesla to get where we wanted to go. From long open highways with smooth asphalt to tiny mountain roads with dusty gravel: it’s all perfectly doable with a Model S. Even the kids immediately said they want to go back.

But for me there is still a whole world to explore and so many countries and things we haven’t seen yet. Norway is definitely on the list, but so is Scotland. Or maybe next year it will be Austria or Switzerland? I can’t yet say for sure what it will be. But what DO know for sure is that next year we will be taking the Tesla Model S again. And because of the continuously expanding supercharger network it will be even easier to cover those long distances.

By the way, if you are on the verge of getting a Model S or X yourself, please use my referral code ts.la/steven1007 and get free supercharging on your new or inventory car.